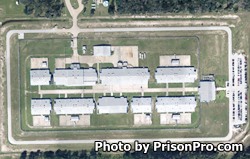 Lychner State Jail is a mixed custody institution located in Humble Texas, part of Harris County.  The facility derives it's name from a victim's rights activist named Pam Lychner who passed away in the TWA flight 800 crash.  Pam Lychner was on board the plane with her two daughters.  Today the facility which was once named Atascocita Stata Jail, now bears her name.

During an inmate's incarceration at Lychner State Jail, they can participate in a variety of educational programs that include literacy, adult basic education and GED courses.  Vocational programs teach offenders skills in construction, carpentry, CAD, computer information systems, and custodial work.  Futhermore, inmates who are nearing their discharge date can participate in project RIO, which helps reintegrate inmates back into society through a work transition initiative.

Lyncher State Jail holds visitation for inmates on Saturdays and Sundays from 7am to 5pm.  Inmates are allowed a single visit per weekend, that is limited to a two hour maximum duration.  The offenders status will determine if they are allowed contact or non-contact visits.  When you visit you should only bring your ID, car key, and up to twenty dollars in quarters contained in a clear Ziploc bag to purchase items from the vending machines.  Your address the inmate has provided to the facility must match the address on your drivers license.