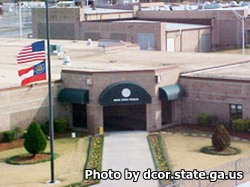 Ware State Prison is located in Waycross Georgia.  It is a closed custody facility that houses inmates who have behavioral/management issues.  The goal of this facility is to take an inmate who is disruptive and modify their behavior so that they may eventually return to the general population of a lower security institution.  Ware State Prison also acts as a release site for sex offenders.  Currently Ware State Correctional facility can hold 1,546 adult males and has approximately 261 security staff members.

Inmates are housed in both an open dormitory setting and single cells depending on several factors.  Ware State Prison has eight fifty bed double celled housing units.  If the inmate is difficult to manage or has safety and security concerns they may be housed in segregation.  Offenders can work in supervised support positions for various county run agencies such as the department of transportation, recycling, landscaping and maintenance, a fire station, and fabrication shop.  Inmates are encouraged to participate in counseling that can reduce family violence, help understand and prevent substance abuse and prepare an inmate for re-entry.  Vocational skills taught at Ware State Prison include carpentry, upholstery, automotive repair and maintenance, culinary arts, electronics, culinary skills, and CADD.

As recently as July 2020 Ware State Prison has experienced several inmate deaths, reports from inmates of unsanitary conditions, including lack of running water, broken toilets etc. were the supposed reasons for riots, and the facility going into lockdown.

Inmate visitation at Ware State Prison is as follows:
General Population holds visiation on Saturdays and Sundays as well as State Holidays from 9am-3pm (processing begins at 8:30am).