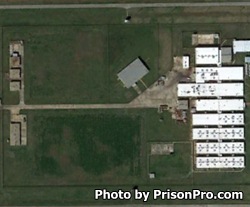 Vance Unit is a minimum security prison located in Richmond Texas.  The facility dates back to 1885 and was originally named Harlem II Unit, later it was renamed after a Texas Governor and became the Jester II Unit.  In 1999 it was renamed a third time and became the Carol S. Vance Unit.  Carol Vance was a former chair member of the Texas Board of Criminal Justice, and implemented a Christian faith-based rehabilitation program which was modeled after a similar program from Brazil.  The prisons Christian influences can be seen immediately upon entering the facility through multiple murals that depict scenes from Christianity.