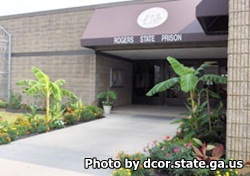 Rogers State Prison is located in Reidsville Georgia, part of Tattnall county.  It is a medium security institution that houses about 1,391 adult males.  This is one of the facilities that acts as a sex offender release site.  Inmates at this institution can work farming, growing vegetables and produce, as well as working with cattle to produce milk and meat for various Georgia correctional facilities.  Offenders who are part of the general population live in an open dormitory setting, while offenders who have been put in administrative segregation are housed in two person cells, those who have been put into segregation can also be placed in isolation/single cells.  Mental health observation on inmates is also conducted in a single cell setting.

Inmates can work on a cattle farm, or doing general farm labor, including growing and harvesting of produce and dairy production.  Those incarcerated at Rogers State Prison can also work in a canning factory, and in various supervised support positions within the county government doing things like custodial work, landscaping, maintenance, recycling and jobs within the department of transportation.  Inmates also have access to vocational courses where they can learn a new skill like barbering, wastewater treatment, culinary skills, and automobile repair.