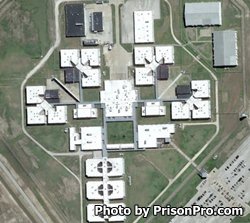 MCConnell Unit is a maximum security prison located in Beeville Texas, part of Bee County.  The facility houses up to 2,900 male offenders of varying custody levels which range from minimum (G1) to maximum (G5) security.  McConnell Unit was named after the former police chief of the town of Beeville, William McConnell.

McConnell Unit, which resides in South Texas, is regarded as one of the toughest prisons in the state.  The facility employs 542 people, approximately 400 of which are security staff, and are used to manage the large inmate population, which includes many prisoners with life sentences.  The facility strives to maintain order within the institution, and has 504 cells that are utilized for administrative segregation.  Some of the inmates housed here include members of the Mexican Mafia and drug cartels.  In 2013, 25 individuals, 14 of which were prison guards at McConnell unit, were convicted of running a smuggling ring in connection with the drug cartels.  They were sentenced under Federal RICO laws and most ended up in Federal Prison.

Inmates at McConnell Unit are provided classes for adult literacy, adult basic education, and can obtain their GED during their incarceration.  Vocational training is provided in stone masonry, bricklaying, and carpentry.  McConnell Unit operates a garment factory and employs select inmates in its operation.  Additionally, offenders are provided work opportunities in the facilities garden, unit maintenance, and in caring for security horses and canines.

Off site medical, mental health, and dental services are provided to all offenders.  Those inmates who are aged or infirmed may be housed in a seventeen bed assisted living unit within the institution.

General population offenders incarcerated at the McConnell Unit have visitation on Saturdays and Sundays from 7am to 5pm.  Inmates who are in administrative segregation are allowed visits by appointment only on Fridays, be sure to call the facility well in advance to schedule your visit.  Visitors may bring up to twenty dollars in quarters contained in a clear Ziploc bag to purchase items from the vending machines, a car key and their ID into the facility.  All visitor vehicles will be searched at McConnell Unit.