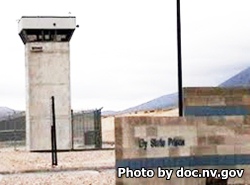 Ely State Prison is a maximum security facility located in White Pine County Nevada.  It can currently house approximately 1,185 adult male inmates.  Ely State Prison participates in the Nevada Prison Industries employing inmates in the production of draperies, which are used internationally.  Offenders can earn a GED and adult basic education while serving their sentence.

All visitors should call ahead to verify the visiting schedule has not changed and that their inmate is still located at Ely State Prison.