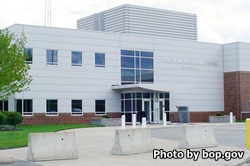 Located in Ayer of Middlesex County, Massachusetts, Devens Federal Medical Center holds 1,092 inmates between their administrative security medical center and minimum security satellite camp.  The FMC currently holds 969 male offenders.  Meanwhile, the Camp holds 123 male inmates.  When FMC Devens was first designed, it was planned to hold up to 1188 male prisoners, which recommended a maximum capacity of 1066 prisoners at the FMC and 122 at the FPC.  The medical center is considered to provide level 4 care to prisoners.  The facility houses and treats male prisoners of all custody levels.  In addition, FMC Devens is 1 of the only 6 federal prisons that will house offenders who need long term help in a correctional environment, along with medical care.  Although many inmates at the prison require specialized medical care, the FMC also houses offenders who just need to be placed in a low or minimum security environment.  The satellite camp also houses low and medium security level offenders.  Inmates of ages 21-96 are typically found in the facility and the average stay length is 120 months at the FMC and 80 months at the FPC.

The Camp provides work to prisoners that are stable enough to work.  Work can vary, but working inmates often help with the maintenance of the FMC.  The Camp is not as large as the FMC, but it does include a housing unit, visiting room, education and food services, a laundry room, a gymnasium, a craft/hobby area, and a religious services area.  The Camp has incorporated an inmate driver program into its system, which has inmates hauling trash from the institution to the nearby landfill.  This program has had a positive impact on FMC Devens by saving the facility about $28,000 - $30,000 per year.  Both the medical center and camp provide services to the prisoners.  Offenders are exposed to numerous support services such as employee development, financial management, psychology services, education, food services, and more.

One of the most notable inmates who has served at Devens Federal Medical Center was known for his involvement with the Boston Marathon Bombings in 2013.  Dzhokhar Tsarnaev, from Kyrgyzstan, was committed of the bombings that occurred at 2013 Boston Marathon, along with his brother, Tamerlan Tsarnaev. The bombings resulted in the death of 3 people, along with injuries among 200 civilians.  Dzhokhar Tsarnaev was first sentenced to FMC Devens, until he was transferred to ADX Florence and was sentenced to death.

Devens Federal Medical Center has both a camp and a medical facility.  Visitors should be aware of both the rules and hours of the section of FMC Devens they plan to visit.

For inmates at the Medical Center:

For inmates at the Camp: