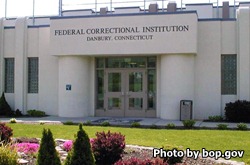 Opened in 1940, Danbury Federal Correctional Institution is a low security institution in Danbury, Connecticut which also has a satellite prison and camp.  Like the FCI, the satellite prison (FSL) runs under low security and the Camp (FPC) is administrated with minimum security components.  The facility has over 1,000 offenders, both male and female, with 816 at the institution, 191 at the camp, and just 71 at the satellite prison.  At the FCI, there is both dormitory housing and cell housing, allowing the institution to hold about 946 male inmates.  The satellite camp has dormitory housing and is designed to hold about 155 female inmates.  FCI Danbury has 55 buildings, including 14 different residences for staff members.  Most offenders who are incarcerated at Danbury have committed offenses such as burglaries, drug offenses, or property related offenses.  When the facility first opened, Danbury only held male offenders, however this was changed in 1944, incorporating female inmates into Danbury.  In the near future this is expected to change once again, returning back to the original all male inmate policies.

Based on the notable incidents and involvement in pop culture, FCI Danbury is a prison that many have heard of.  One of the most notable incidents occurred on July 7th of 1977.   On this day at 1:15 A.M. a deadly fire arose. The fire was started in the pair of clothes that belonged to an inmate.  These clothes were hanging on wooden pegs in a laundry room of the prison.  Due to fuels in the room, the fire was able to spread rapidly.  Almost an hour had passed before the fire was put out, however, at this time it was already too late to save some inmates.  The fire was so large that many exits were blocked, leaving only one exit. Due to the delay of evacuation, five prisoners ended up dying from smoke inhalation.  This incident caused not only Danbury to reevaluate their fire safety protocols, but the whole federal prison system itself.

A notable face of FCI Danbury goes by the name "Michael Rudkin." Rudkin was a correctional officer at Danbury, but now is serving a term at USP Coleman.  Back in 2008, it was discovered that although Rudkin was a married man, he was having sexual relations with a female inmate.  After further investigation, it was revealed that Danbury wasn't just sexually involved with one female inmate, but several.  Rudkin was imprisoned for having sexual relations with an inmate and was sent to Coleman United States Penitentiary.  Two years later, Rudkin was found guilty of hiring a hitman to kill the inmate he had sexual relations with, his ex-wife and her new boyfriend, and the Office of Inspector General agent assigned to his case.  This increased his sentence to 90 years.

Danbury has also been mentioned in TV shows and other forms of media several times, along with having notable inmates.  For example, singer and actress Lauryn Hill served 3 months in Danbury for not properly reporting her income and failing to pay tax returns for 5 years. Lauryn Hill was released in 2013. Also, George Jung, was imprisoned at Danbury for his involvement with the Medellin Drug Cartel and the smuggling of massive amounts of cocaine. His life and incarceration is demonstrated in the 2001 fim Blow.  Piper Kerman, author of  Orange is the New Black: My Year in a Women's Prison, was incarcerated at Danbury after pleading guilty for money laundering. She was released in 2005, having served 13 months.  Kerman's book describes her time at Danbury, along with the Netflix series Orange is the New Black.  Because the television series was based off Kerman's book, some of the show is based on the setting of FCI Danbury.

Danbury Federal Correctional Institution has 3 different facilities, therefore, depending on what facility you wish to visit, there will be different visiting hours.