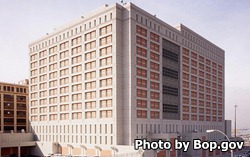 Brooklyn Medical Detention Center, sometimes referred to as MDC Brooklyn, is a medical detention facility located in Brooklyn New York, part of Kings County.  This facility is considered one of the largest and most complex Federal Detention Centers in the United States.  On a daily basis, Brooklyn MDC transports between 80 to 100 pre-trial detainees from the facility to courts in New Jersey, Brooklyn and Manhattan.  In addition Federal Detainees from as far away as Eastern Pennsylvania are also housed at this institution.

Brooklyn Medical Detention Center has an average population of around 1,785 male and female offenders, who vary greatly in the duration of time, and security level.  MDC Brooklyn averages 8,400 yearly admissions but handles on average over 44,000 offenders each year.  While most inmates are housed short term, the average time an offender is at MDC Brooklyn is 120 to 180 days.  In addition to inmate's who require medical attention, MDC Brooklyn also houses around 350 Cadre offenders who assist in the upkeep and maintenance of the facility.

Due to the medical nature and relatively short stay of inmates at this facility, programs and classes are limited.

Inmates located at Brooklyn Medical Detention Center are allowed one hour visits, and at least four hours of visitation per month.  Up to four visitors per inmate are allowed to visit during a visiting session.  Brooklyn MDC utilizes a complex visitation schedule that correlates to the inmate's floor location, unit number, inmate's identification number, and the month.

During even months (February, April, June, October, and December) inmates with an even 5th digit register number will have visitation during the afternoon, and those with an odd 5th digit will visit during the evening.  This will reverse during "Odd" Months (January, March, May, July, September, and November) and inmates with an odd 5th digit register number will have visits in the afternoon, and those with even 5th digit numbers will visit in the evening.  The two visiting periods on weekdays are from 12pm to 3pm and from 5pm to 7:30pm (visitors will not be allowed to enter the first period after 2pm, and the second after 6:30pm.

Always contact this facility to ensure your inmate is currently located here and that the visitation times have not changed.