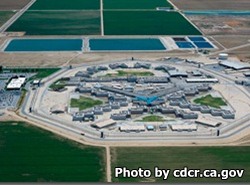 Wasco State Prison is a correctional facility located in Wasco California.  It serves as a reception center which intakes, classifies, and diagnosis inmates.  Once the intake process is completed the inmates are given their appropriate institution that they will serve their time in.  Many of the inmates housed at Wasco are their for a short period of time.

The reception process can take anywhere from a week to 90 days depending on many factors.  Inmates are evaluated mentally, and physically and a complete criminal and family history is taken.  From this evaluation the security requirements of the inmates are determined as well as any programs the inmate may require, or benefit from participating in.  Based upon all the information the staff gathers, and the needs of the inmate they will then be assigned a permanent facility.

Visitors who have an approved visitation application may visit on Saturdays and Sundays from 8am-3pm, you must get through visiting processing by 2pm, so if you arrive after 2pm you will not be allowed to enter into visitation.  If you are visiting inmates in administrative segregation or non-contact you must schedule a visiting appointment online.