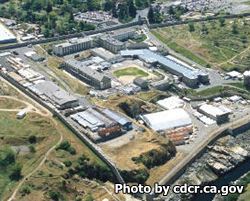 Folsom State Prison is located in Represa California and is one of the oldest correctional facilities in the state, and was one of the first Maximum Security prisons to come into existence.  Originally opened in the 1880's as one of the first maximum security institutions, today the facility houses minimum and medium security inmates.  Until recently, Folsom only housed male offenders, now it has begun housing women in a separate stand alone facility.

People may recognize this prison as the subject of a Johnny Cash song entitled "Folsom Prison Blues".  This facility has also housed some of the most infamous inmates including, Suge Knight, Rick James, and Charles Manson.  This facility is responsible for manufacturing the vast majority of California License plates.  This institution has also been an on site filming location for several movies.  Folsom Prison has a rich history and dates back to the late 1800's, it was also the first correctional facility ever to have electricity.  Folsom State Prison has seen several escape attempts over it's history, some of which were violent, and resulted in loss of life.  Those interested in the history of Folsom Prison can learn many things by visiting the Folsom Museum, which is located near the entrance of the facility.

Anyone wishing to visit an inmate at Folsom State Prison must utilize the Visitor Processing Appointment Scheduling System (known as VPASS).  This electronic system requires you create an online account, and allows visitors to schedule their visit online.  You are also allowed to visit during the same hours on the following holidays:  New Year's day, July 4th, Thanksgiving and Christmas day.  California Department of Corrections now allows you to schedule a visiting appointment online.