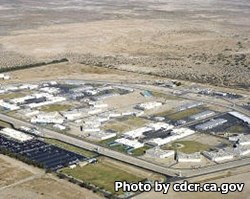 Centinela State Prison is located in Imperial California.  The facility houses over 5,000 inmates of varying custody levels.  The main focus of this facility is for the inmates to take control of their lives through self development and improvement.

The large number of vocational and work programs available at Centinela are designed to reduce the likely hood of inmates re-offending once they are released.  Academically inmates can earn a GED and a basic adult education.  This facility also helps maintain the surrounding community through community service crews.  Classes on parenting, controlling behavior and reducing anger and violence are an integral part of an inmate's rehabilitation.  Vocational courses include but are not limited to HVAC, auto repair, computer repair, electrical, plumbing, drywall and carpentry.

You must have an approved visitors application in order to visit.  Inmates may have visits on Saturdays and Sundays from 8am-3pm, but you must arrive prior to 2pm to be admitted to visitation.  Visitors are also permitted on four holidays (New Year's day, July 4th, Thanksgiving and Christmas day).  If your inmate is on administrative segregation (non-contact visits) you must schedule a visiting appointment online here.