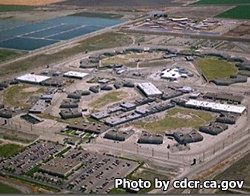 California State Prison in Corcoran is actually a complex of several facilities.  Each of the facilities specializes in its own type of offender, and offers different programs and privileges for inmates.  The following are the facilities that make up Corcoran: Administrative Segregation, Security Housing, Protective Housing, Level I, Level III, Level IV, an Acute care hospital, and the prison industry authority.

Anyone incarcerated at any of the facilities that make up Corcoran my be eligible to participate in programs designed around helping the inmates.  Some of these classes include mental health, basic and GED education courses, substance abuse treatments and more.

Once you have completed a visitors application and been approved you may visit your inmate on Saturdays and Sundays from 8am-2:30pm, and on New Year's day, July 4th, Thanksgiving and Christmas day. You are required to schedule a visiting appointment if your inmate is incarcerated in Administrative Segregation, or the Security Housing unit.  You can setup an appointment online here.