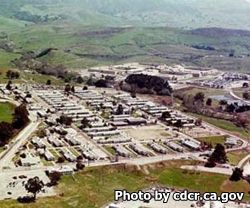 California Men's Colony is a state run correctional institution located in San Luis Obispo California.  The facility houses over 6500 inmates from minimum to medium security custody levels.  California Men's Colony is a complex made up of two facilities, East and West.  The East facility holds medium custody level offenders and has a fully functioning hospital that cares for sick and injured inmates as well as provides support for mental health.  The West facility holds minimum custody level offenders and provides are large amount of support services to the county through work the inmates can participate in.

Basic adult education and a GED programs are some of the things inmates can take advantage of while incarcerated.  Selected inmates may work on the fire crews that help the conservation department battle wildfires.  Other vocational opportunities exist at this institution as well for inmates looking to learn a new skill.

Inmates have visitation on Saturdays and Sundays from 8:30am-3:30pm, if you arrive after 2:30pm you will not be admitted to visitation.  Visitors are also allowed on New Year's day, July 4th, Thanksgiving and Christmas day.  You may also schedule a visiting appointment online here.